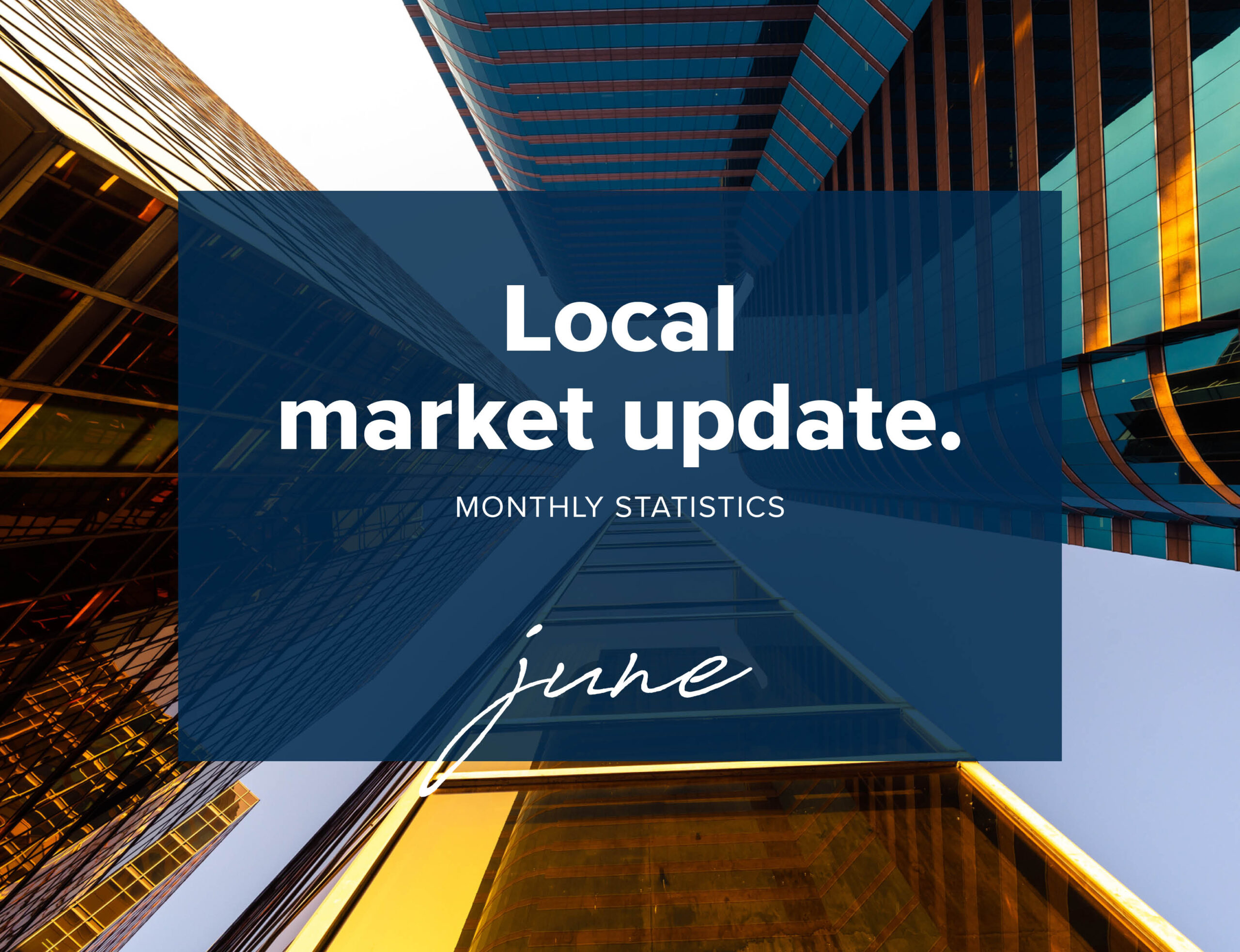 The tides of our local real estate market may at last be shifting, as buyers find relief in increasing inventory and the frenetic pace of sales slows noticeably. At the end of May, inventory across the 26 counties served by the Northwest MLS had increased by 59%, with 8,798 active listings in the database, compared to 5,533 active listings just a year ago. While this shift may cause concern from some who anticipate a drop in the market, Windermere’s Chief Economist Matthew Gardner had this to say: “What’s more likely to occur is that the additional supply will lead us toward a more balanced market, which after years of such lopsided conditions, is much needed.”

While inventory has increased, the meteoric price hikes seen in this first part of 2022 – including again in May’s closed sales – is expected to slow dramatically in the next half of the year. Seattle saw a historic first in April, with the median sold price for a single-family home topping $1 million for the first time. May home sales continued that trend, with the median sold price inching up to $1,025,500, which is a 12% increase from $919,000 in May 2021. King County as a whole mirrored this trend, with the median price of single-family homes reaching $998,888 in May, up from $995,000 in April and up 14.8% from last May’s median price of $869,975.

May closings reveal that the Eastside and Snohomish County didn’t follow this same pattern, instead experiencing a much-needed cooling of prices. On the Eastside, the median sold price for single-family homes fell from $1,722,500 in April to $1,590,000 in May. While last month’s median price is the lowest since January of this year, it was still up 22% year-over-year. The Eastside saw an increase in the percentage of homes that had a price change before selling, hitting 10% in May — double that of April. This is likely due to Eastside sellers needing to adjust their price expectations. While a majority of listings in the area — about 66% — still sold over list price last month, a full month of inventory and a 403% increase in active inventory on the Eastside from February to May means that buyers have more choice and agency than they’ve had in some time. Homes are still selling, but multiple offers are far fewer and sellers are more likely than before to accept an offer written with contingencies.

Snohomish County also saw a shift in May, likely due to the combination of increasing inventory running headfirst into decreasing buyer budgets thanks to rising mortgage rates. With .85 months of inventory, prices reflected this, with the median sold price for single-family homes falling slightly to $815,000 last month, down from $839,298 in April. However, a majority of homes sold for over list price and quite quickly, averaging less than two weeks on the market. It’s worth noting that these statistics largely reflect home sales that went under contract in prior months when competition was at its fiercest. The median sold price for Snohomish County condos dropped just slightly to $545,000 last month, down from $550,000 in April. With only two weeks of inventory on hand, the county’s condo market is likely to remain competitive for a while.

Falling prices in the Puget Sound region may have caused concern for some, but most analysts see this as a necessary and long-overdue price correction. Prices for single-family homes (excluding condos) in King County rose from $775,000 in January to a whopping $995,000 in April, a change of $220,000 in only four months, or 28.4%. Last month, the Eastside saw prices decrease by only 8%, and this was likely only because prices had previously risen so astronomically in the area. Neighborhoods that saw the highest appreciation will likely experience a sharper correction, but this may serve to help some previously unlucky buyers re-enter the market and finally find success.

If you have questions about pricing trends in your neighborhood, or how to make the most of your purchase or sale, please reach out to your local Windermere broker to see how they can help. 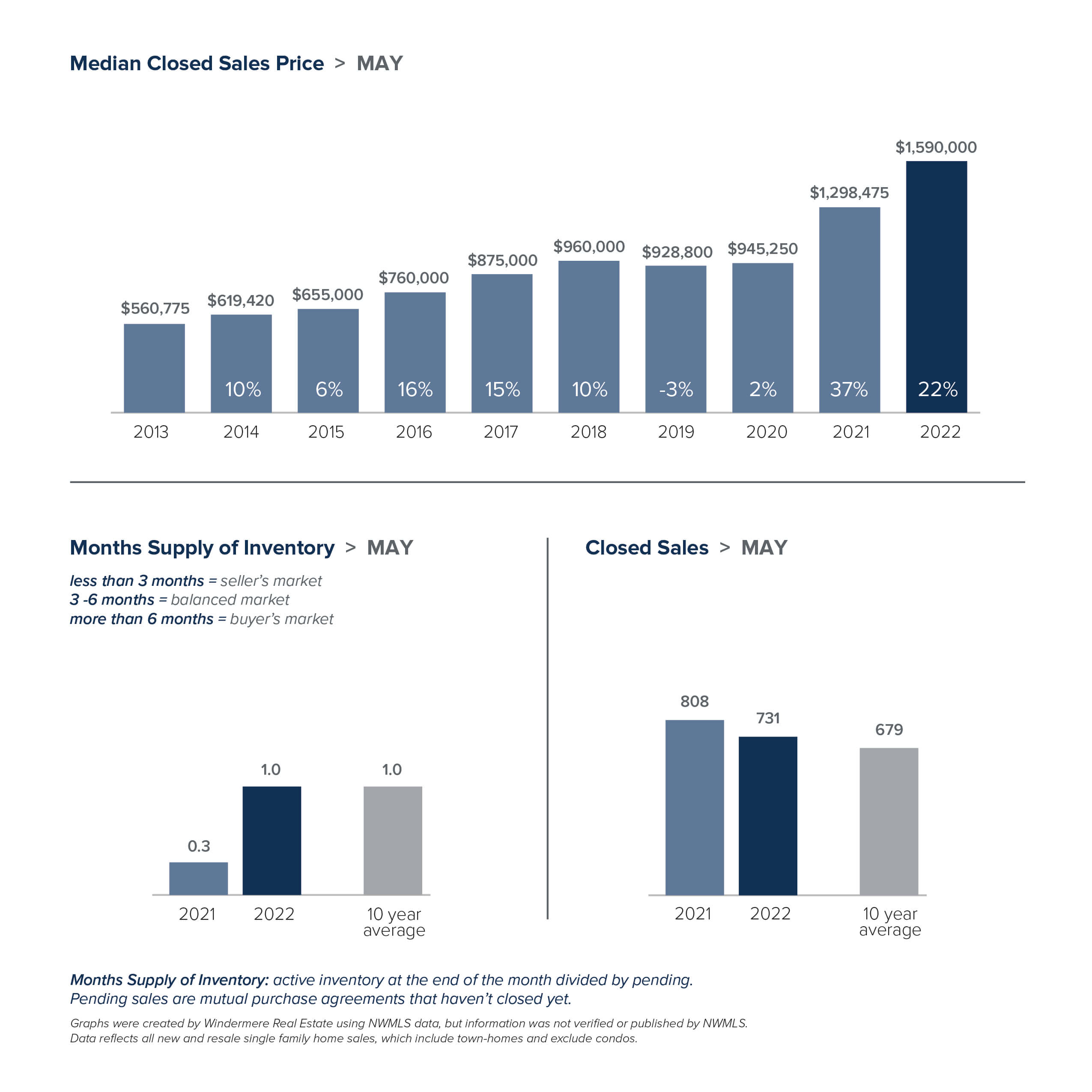 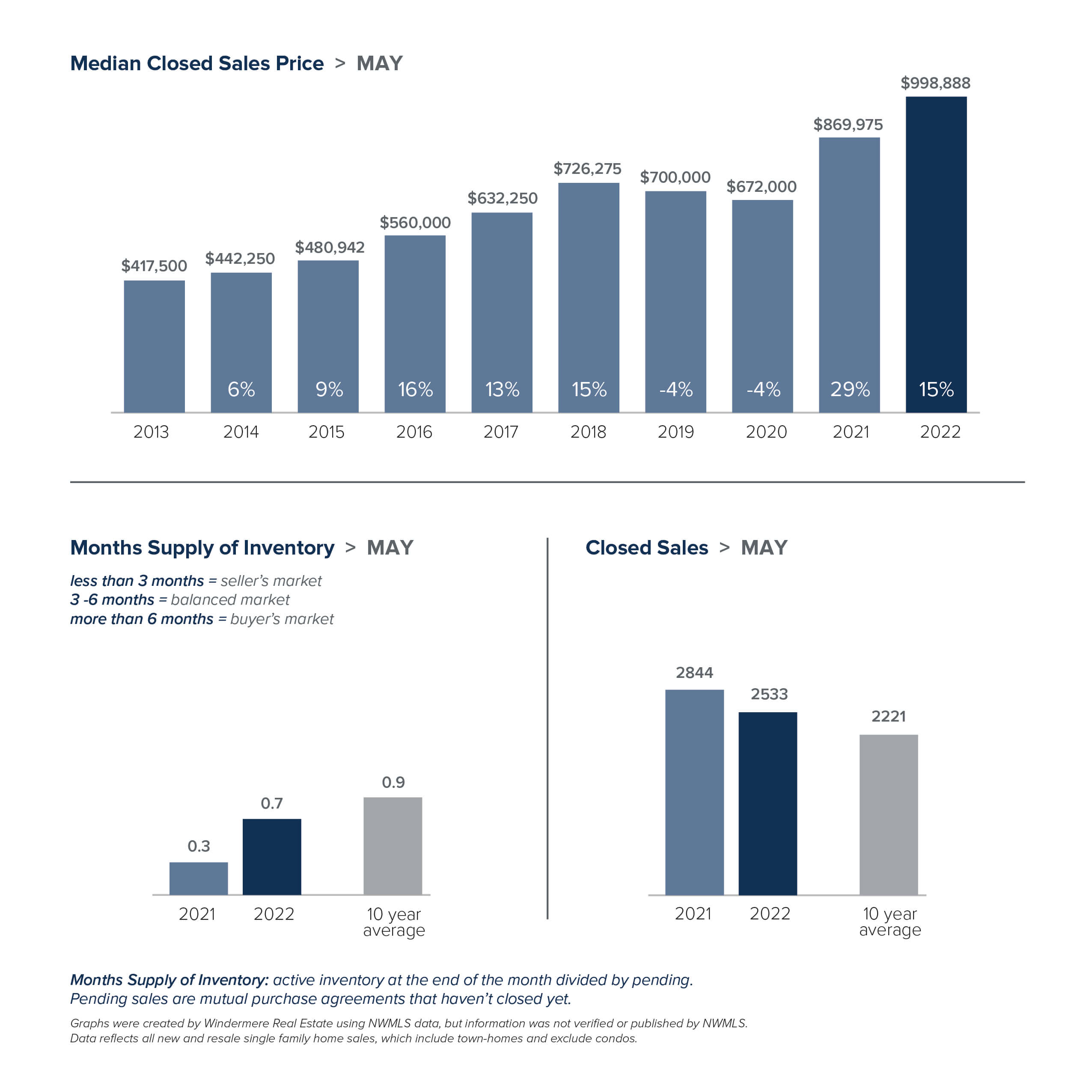 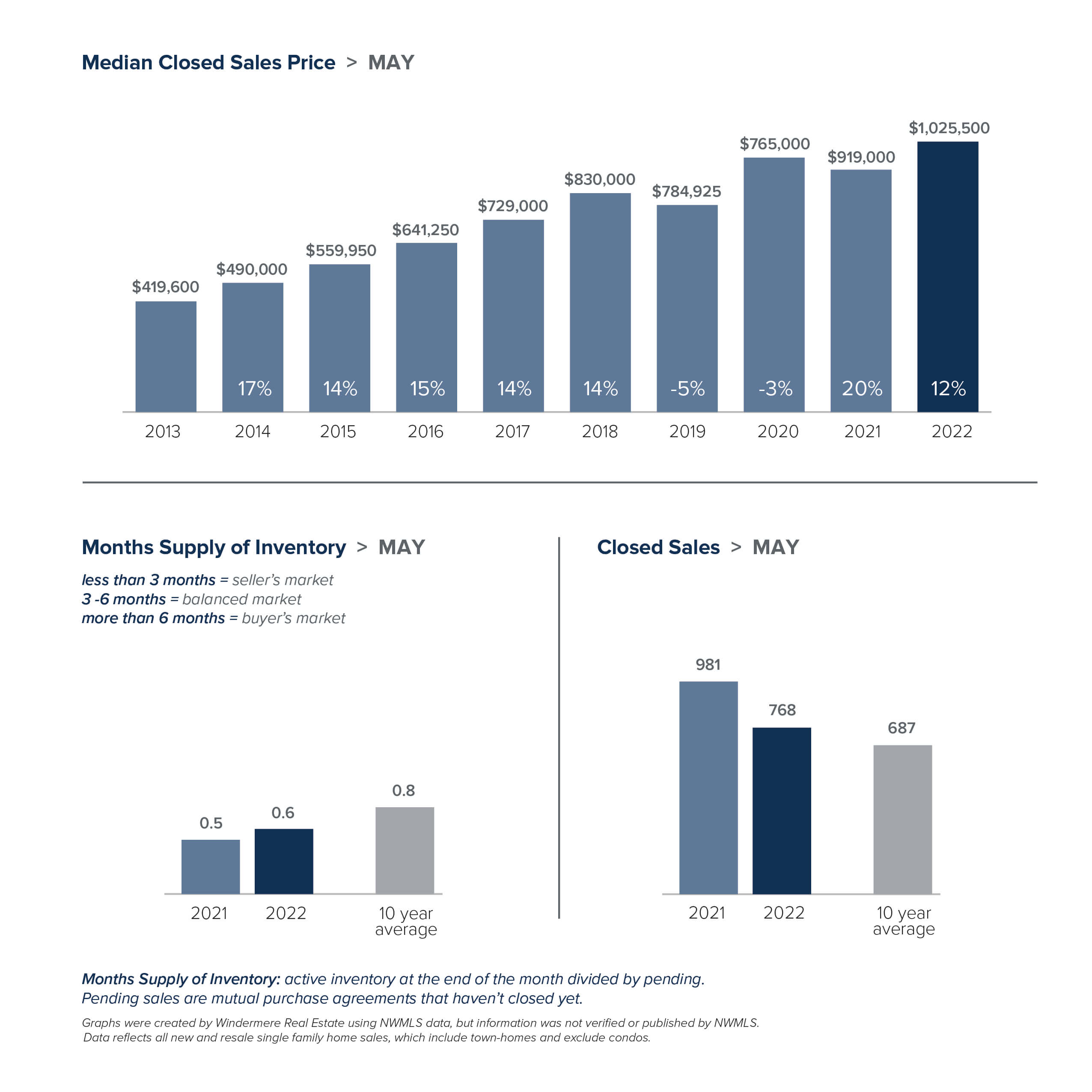 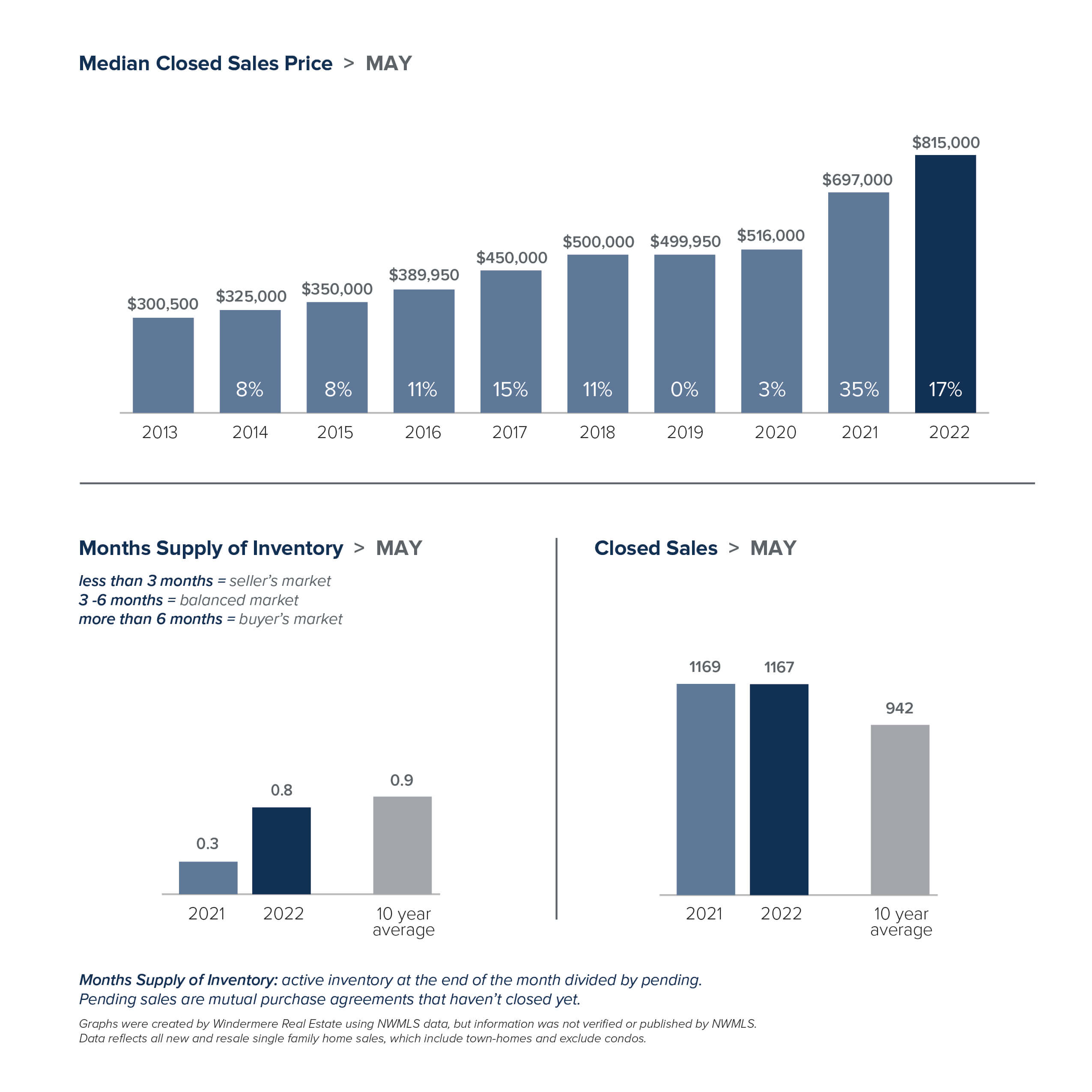